My Willy dog story/journey ..When I got my results it was one of those life-changing days. When the initial shock and dust had settled I decided life is definitely too short and meant to be lived. My passion as a young man was in all things 1960’s Americana. I grew up with a father that was the biggest importer of American cars in the UK, so I grew up with all the muscle cars of 1960’s, repairing them for a living, building and racing them as a hobby, and customizing them to the standard where they won the top UK /European shows. Saying went: if it has wheels” Simmo”(my nickname)will customize it, so I thought I would just do a couple more custom bits, That’s the background. 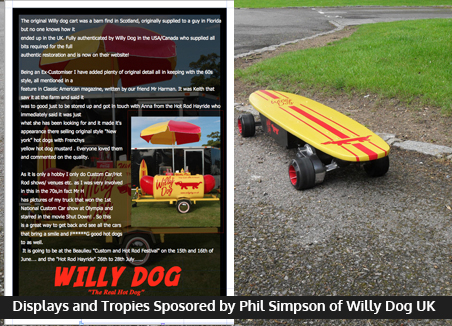 A little note from Will, the CEO & Top Dog at Willy Dog
about Phil Simpson

I first spoke with Phil Simpson, maybe 10 years ago. He had just acquired one of our Famous WD carts and was interested in restoring it. I was impressed with Phil’s passion  and determination toward keeping everything original. Needless to say, we became friends. I even had the honour of meeting Phil while I was in the UK. Phil shines; he is creative, imaginative, resourceful and an exceptionally skillful entrepreneur.

Since then, Phil has become our number one fan and frankly I think I may be his biggest fan. When I see other things that Phil has created in our name, a motorized skateboard; a boat; a tee-shirt cannon; chairs; on and on, I am so flattered. I love showing others, Phil’s creations as though I was showing pictures of my kids.

Ironically years after I met Phil, he asked me to help him locate his best school buddy from 50 years ago. It turned out that his friend, Paul K, was also an old friend of mine here in Canada and Pauls parent’s were friends of my parents and who ironically also had common connections in Africa!

I believe in Karma, and I think my meeting and friendship was in the cards. He is truly a one-off character that I am proud to know!

The blueprint plans are the ones there were submitted to Red Bull for the next Red bull soapbox race when it’s next held here in the UK.Chassis I thought I would buy a Harley Davidson cargo trailer to customize and haul a bobber I was going to build and show. In typical eBay fashion I typed in “American Harley Trailer”. The first thing that came up was “American Hot Dog trailer” It was this hot dog shaped thing on a trailer with alloy wheels in bits and in need of complete rebuild and restoration. I knew from the moment I saw it, I had to own it. I had no idea what it was or what I 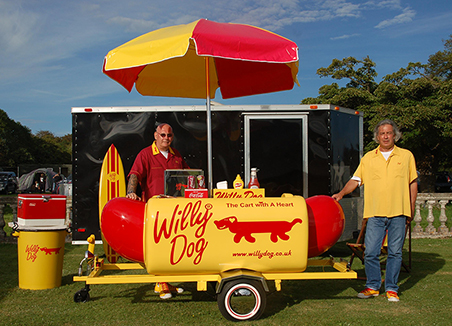 would do with it, I just had to own it. I did some research and found out who the manufacturer was and emailed willy dog and communicated with Joanne, got all the low down, went on your site and saw them all gleaming – by now I was totally hooked. SO I started my business on a lucky chance find!

This is where the “it’s meant to be ” story really starts. I get back in touch with the seller only to find out she has just sold it! Never mind I thought case you snooze you lose. Some two weeks later she emails me asking if I am still interested in the trailer, apparently the guy who bought it offered it back to her due to a change in circumstances.
she gave me his details. He had bought it and transported it back down from Scotland to literally 25 miles from where I live. Meet with him the next day and bought it, obviously meant to be mine. Within two weeks, it was stripped down and fully restored to its former glory, simply awaiting decals and bits from Willy dog Canada, is the start of a long relationship that continues to this day.

Second “meant to be”:

The willy dog is stored at a farm near me, that houses other custom builders and one of the UK’s biggest suppliers of vintage and custom cars for film and TV. One day I am approached by a guy who had heard I had this “Custom American hot dog cart ” He introduced himself as the official photographer for Custom car magazine at which point I told him that I had had some of my custom builds featured in his magazine back in the ’70s and in fact had a major feature done when one of my trucks won the First Olympia Uk and European show in 1975. He immediately asked if the truck was the famous “Blue grass” stars and stripes Falcon. I said yes that was mine and he said you must be Phil Simpson?, Your was the first truck 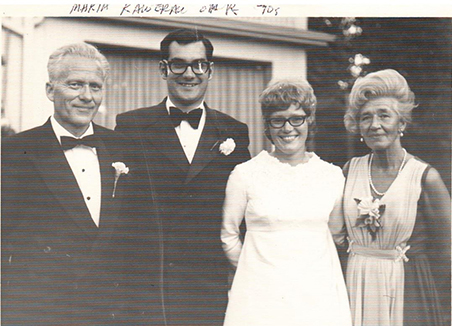 I ever photographed as a kid and it was you that let me onto the stand to take photos, it was that day that started my love of photography and trucks. He has since found and sent me photos I had never seen. It was him that took the photo of the willy dog that is on your website.

He spoke with the organizers of one of the biggest hot rod and custom events locally and they asked me to bring the cart to the show. I like an idiot said, who would want to come and look at a hot dog cart. There the answer was the start of a new chapter in my life….No we want you to sell HOT DOGS!!.

Like my father once told me, son, if you’re going to be a dustman just make sure you’re the best dustman. With this in mind, I went out to find the best product you could buy and if I was going to serve hot dogs they would be the best and decided that we would make selling hot dogs an experience. So after trying loads of inferior hot dogs we finally found the best one but we immediately hit a problem. 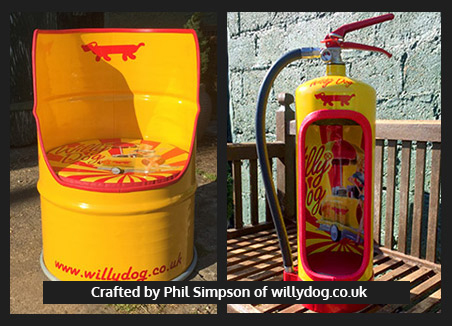 Third “meant to be”:

This company only sold in huge quantities and to major sporting outlets like Manchester United and Arsenal football clubs. They put me in touch with the south of England rep, who it turns out lived in the next street to me!!!! He loved the willy dog so much and my desire to sell the best that he said he would personally bring my small orders back with him and drop them off. We had many beers together and still remain friends. How lucky was that?. I asked my cousin Gary if he wanted to come and help me as we had never served a hot dog in our lives. We decided from the off that we would have an American theme to our stand and make it the Willy dog experience. We even got people asking for a” willy dog” and not a hot dog. A huge amount of time effort and money went into sourcing genuine original retro American props, which would all then be done in the willy dog colors, I wanted to have a cartoon and logo that was synonymous to us.

At the first show, we were going to attend, the guy who did the Radar magazine write-up for that show was a guy called Tim Odell AKA Surfmonkey the UK’s biggest designer of custom t/shirts, the Uk version of Ed Ross. He asked if I wanted to place an ad in the show mag. Told him about my cartoon idea for my t-shirts, and we started a marathon two-day exchange of emails with all his hand sketches by late one Saturday night, I now sought after collectors t/shirt was born and the infamous logo that adorns them, and my cart was created “Get your willy in a bun!” which has a double meaning here in the UK and is the source of many jokes and conversations at all shows. Tim retired shortly after that due to failing eyesight,mine was the last t/shirt he ever designed. A real honor.

Fifth “meant to be”:

During all the big build-up to us doing our first ever outing /show, I did manage to find the Harley Davidson trailer I was originally looking for. The guy who runs the Knocksville raceway in Scotland (ring any bells?)had one for sale. When I explained I was going to haul the willy dog in it, he casually said.. A guy in the local town had something like that. Got his 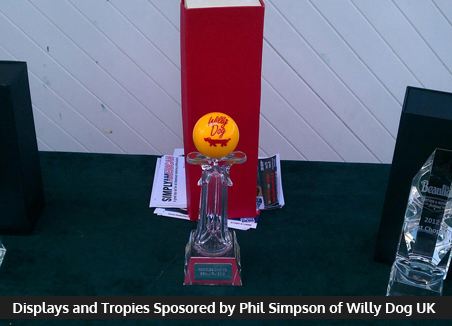 number and phoned him, This will blow your socks off! Apparently, the woman who originally owned the willy dog lived in the next town and came to him as he is a fiberglass fabricator, She wanted him
to make a mold of the willy dog as she was going to produce them.

This is the reason it was in bits when I bought it. He made the mold at a cost of £2500 which she could then not afford to pay for. Her plan was then to pay him from the sale of the original willy dog but she never did. My immediate reaction was to buy it for two reasons:
One to stop her or him ever making them and also for me as an insurance policy if ever mine got damaged. So tongue in check I asked if he still had the mold, and he said” luckily” enough he did as they were supposed to have broken it up The previous week as they needed the space, so when I said I would buy it he was amazed to get rid of it. He then threw in 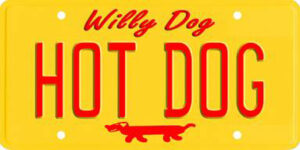 the mix that he had on her original instruction and made a trail body,which he also still had somewhere, could not believe what I was hearing.

The guy from Knocksville raceway collected it and we meet halfway in Lanarkshire and I bought back both the trailer and the mold…You could not make it up. This is the trailer you see in all the background photos
which were taken by the guy from Custom car magazine. Really is a series of meant-to-be coincidences that were the making of what willy dog and what stands for today. This was all in late 2011.. 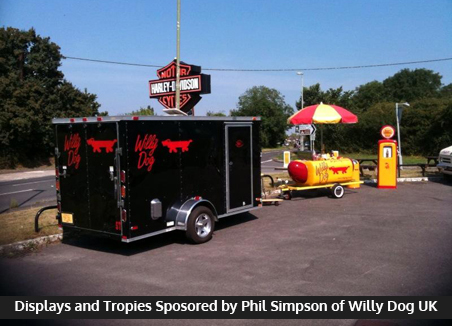 The willy dog cart and all its ancillaries became known all over the south of the UK attending hot rod and custom shows and even sponsoring the converted “Peoples choice award” at the biggest custom show, Beaulieu motor museum.
This trophy was presented by myself and Lord Montague,it was a real high light in the Willy dogs history.
Willy dog sponsored that show for four years.

Willy dog had the honor of being asked to attend the 90th celebrations at Warrs Harley Davidson, the oldest dealership outside of the USA. It has been featured in the Radar and custom car magazines. Plus other prestigious events, it became known as the willy dog experience and had a following of faithful showgoers. As I have mentioned the biggest accolade is you guys at willy dog HQ having my photos on your site.
Guess that’s when you know you got it right. Thank you for that. 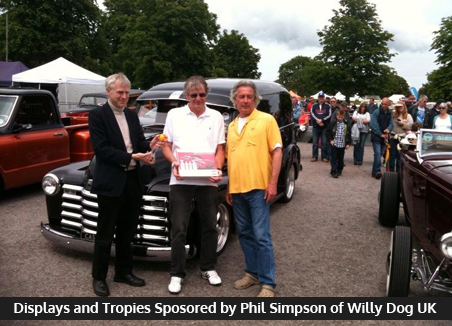 So I am sure you will agree that it is this series of coincidences that leads me to believe, that me and the willy dog were just meant to be, Then finding out that not only do you know my childhood best friend,your sister married his brother!

Now I am back on the scene. I am thinking up and designing new features for the next chapter in my Willy dog journey..
There are so many more small bits i could add but hey where to you stop.
I will send a few Photos from some of my favorite moments with the willy dog.

Thanks for the journey.